P.S. That’s the Wilde plays finally done. Next week: something else! 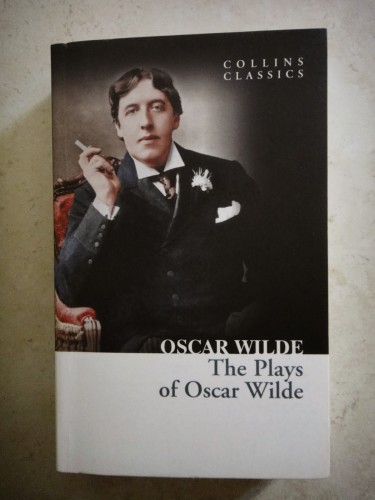 This is the fourth Wilde play I’ve read so the idea is quite clear to me now:  An Ideal Husband is set in Victorian England and deals with some issue of the English upper class. This time it’s blackmail, politics and public image and by now I’m fairly certain that that Wilde saw English society as two-faced and hypocritical. Alongside The Importance of Being Earnest (click here), An Ideal Husband is considered to be one of Wilde’s greatest plays.

An Ideal Husband begins at the house of Sir Robert Chiltern, a wealthy bureaucrat in the ministry of foreign affairs (but a good guy, so they say). At his own dinner party, Robert is introduced to Mrs Cheveley, a sketchy businesswoman. When the two get a moment alone, Mrs Cheveley reveals that she knows Robert’s dirty secret: that in his youth, he made a fortune off the stock market by selling a state secret to a baron (the plot thickens!). Mrs Cheveley isn’t going to tell anyone, she claims… well as long as Robert lies to foreign affairs. You see, she’s invested a large sum of money into a crappy canal project and unless Robert convinces his superiors that the project is great she’ll lose a lot of money. So Robert just has to tell this one lie, or his secret will come out and his political career is over. But stock market scandals aside, Robert wants to be an honourable man. And his wife, Gertrude, thinks the world of him and her image of him would be tarnished if she found out what he did in his youth. So lie and keep hidden his one big mistake or tell the truth and have it come out? Did I mention that Gertrude also has a history with Mrs Cheveley?

An Ideal Husband is Robert’s moral dilemma: trying to do the right thing while avoiding ruin. And its about his wife, Gertrude, having to come to terms with the fact that Robert isn’t perfect. There’s a tendency for Wilde to become cynical when he’s serious but that doesn’t happen in An Ideal Husband. Instead, it’s refreshing to see the portrayal of Robert and Gertrude Chiltern as a wholesome married couple having to come to terms with Robert’s past. And Lord Goring, Robert’s close friend and an idle British dandy, is one of the most honourable characters to be found in Wilde’s works.

I suppose I should mention that the play is good. Really good. It’s a little longer and more serious than Wilde’s other works, but one of his strongest. Less wit this time, but more drama. Criticisms: some of the sentiments expressed in the last act might seem quite sexist to a modern reader. Gender roles were different back then, I suppose. Not likeable, but different.