Not bad, but if you’re looking for something suitably epic and mythical you could probably do better than Ragnarok.
-Imran 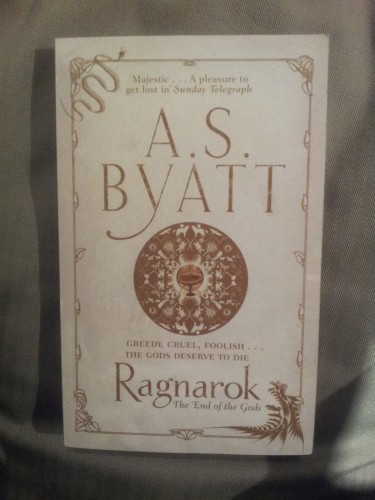 I’ve never previously heard of A.S. Byatt but apparently she’s a big deal, having written some 11 books and winning the Booker Prize. Ragnarok: The End of the Gods is her latest work written as part of the Canongate Myth Series (coincidentally, the Good Man Jesus is also part of the series. Click here for the review). Just to clarify: the word ‘Ragnarok’ is the name given to the apocalypse/end-of-days in Norse Mythology and the book Ragnarok focuses on the events that lead up to this apocalypse.

Ragnarok: The End of the Gods is essentially a recap of Norse Mythology summarizing the beginning and then focusing on the events that lead up to Ragnarok itself. The story is told from the perspective of a sickly child who’s taken refuge in the countryside during World War II and has found solace and escapism in the Norse Myths. While the child’s life and thoughts are explored here and there in the book, it quickly becomes clear that she serves as not much more than a frame to the story and that Odin and Loki are the real stars of the show. This would have been a good thing because the Norse myths are rich and captivating, if not for the fact that the presentation feels like a let-down at times.

While the latter half of the book and the events of Ragnarok itself were gripping to read, the first half of the book was so slow and directionless that I nearly gave up on it entirely. In the first half its all set-up and scenery descriptions and, at the end, I’m still not sure if the pay-off justified trudging through all of that. To be fair, the descriptions themselves are articulate and beautiful but if you’re not much of an aesthete (and I’m not) then they’re probably wasted on you. Perhaps it’s just preference but I much prefer beautiful plots to beautiful language.

On the plus side, there’s a definite love and attention for the source material by the writer although I can’t help but wonder if there was too much love; too much reverence. It seems that Byatt is more concerned with trying to create an air of wonder and surrealism than to actually restyle the Norse myths into a compelling narrative; in fact, she seems to hint at this in her closing comments. That’s not to say it’s all bad though. Loki is certainly styled into a fascinating character and the conclusion is immensely satisfying in an epic way. As for the sickly child, there’s some interesting subtext about the way she finds comfort in the Norse myths and her thoughts on religion, but really she’s given so little ‘screen time’ that there’s not much else to say about her.

In the end, I’m not sorry to have read it but I can’t give it a glowing recommendation either. The Norse Myths truly come to life in the second half but it takes some painfully slow build-up to get there.

Not bad, but if you’re looking for something suitably epic and mythical you could probably do better than Ragnarok.

See you next week